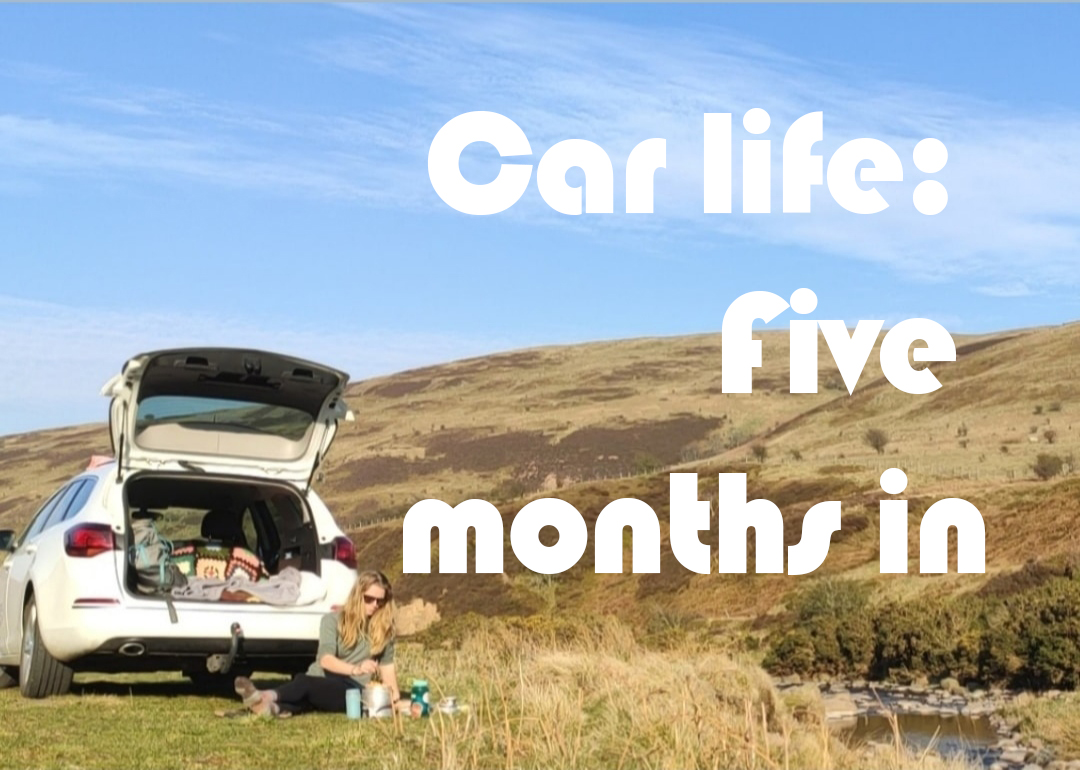 FIVE THINGS FOR FIVE MONTHS: A summer of #carlife.

FIVE MONTHS. I have lived in my car for… (nearly) Five. Months.

Three pot noodles, two dodgy encounters and one parking ticket later, I’ve watched the world go by out the boot of my Astra Estate. And now, I’m going to tell you about some of it.

ONE. I’ve never eaten so many bagels.

I swear I’ve never seen a stale bagel. Whilst this should really make me question what could possibly be in them that they last forever, it actually just means they serve as a serious car-life staple. You get 5 in a bag – that’s 5 meals, boyo.

Soup and bagel. Lentil daal and bagel. Smashed avocado on a bagel. Cheese, tomato and hummus bagel sandwich. And for dessert? Nutella bagel.

Minimal cutlery is involved and the empty bag can be used as a bin. Occasionally you’ll find a toaster and it’ll be like winning the lottery. Bagels. That’s all I’m saying.

TWO. ‘Will someone hear me if I scream?’

Finding parking for the night is part of the fun. I love waking up to new scenes and listening to the gentle hum of the world outside – waves, gulls, rivers, songbirds, laughter – all tucked up in my little space.

No one knows I’m here, but I hear everything.

Unfortunately, that also means that I can only hear the car pulling up next to me at night and I have no idea of the occupants’ intentions. Did they see me get into the car? Was my laptop left in view during the day? Are those lads pulling donuts, were they drinking, and what if they crash into me?

It’s a difficult balance between finding spots that are far enough from the rowdier folk but also within earshot of people that might come to your rescue. And so I hear myself asking, ‘will someone hear me if I scream?’. It puts the safety aspect of this lifestyle into perspective. If it doesn’t quite sit right, if something is putting me off, then I don’t stay there. I won’t sleep anyway.

And in it, write down all those tiny little moments you see and swear you will remember but just won’t. Giving a university presentation from your driver’s seat. The lady who carries seashells in her makeshift face-mask basket. The boys on bicycles who offer you their freshly caught fish. The field rat that made off with your dropped tortellini. The first time you find out that Greggs does a VEGAN sausage, cheese and bean melt. The woman and son who quietly released a balloon and cheers-ed a tinnie for his friend that committed suicide, and the kind stranger that sat with them.

A lot is going on out there.

^^Your start-up kit for #carlife. I don’t think there is any generic situation (other than financial) that can’t be solved with the above items. Get creative. Challenges accepted.

FIVE. Relax, Zo, and figure it out later.

I tried to plan everything – where to park, what I was going to eat, when to shower, where is the nearest toilet. I tried to replicate normal house-life but just in a car.

As soon as I let this ideal go, everything seemed to work it out before I’d even realised it was a problem.

Accept that you won’t be eating full homecooked meals every night.

Accept that, even though you bought soap and a brush with only the best intentions, you will stash those dirty dishes until you next get to the sink at work.

Accept that you will try to use a She-Wee on your bed because you’re in too much of a public space to go outside, and you’ll hear it successfully going into the bottle but apparently you’ve used it at just the wrong angle that there’s suddenly a suspicious little wet patch just appeared on the duvet, and it’s already 11pm so there’s not much you can do about it, so a next-day shower and sheet-change will just have to do. You’ll survive.

Get ready to garner a whole new appreciation for the normally vertical activities such as getting dressed standing up and walking between rooms.

HashtagCarlife remains one of my best decisions. I plan to keep it going whilst the weather stays, and then go part-time for a while BECAUSE… *drumroll please* 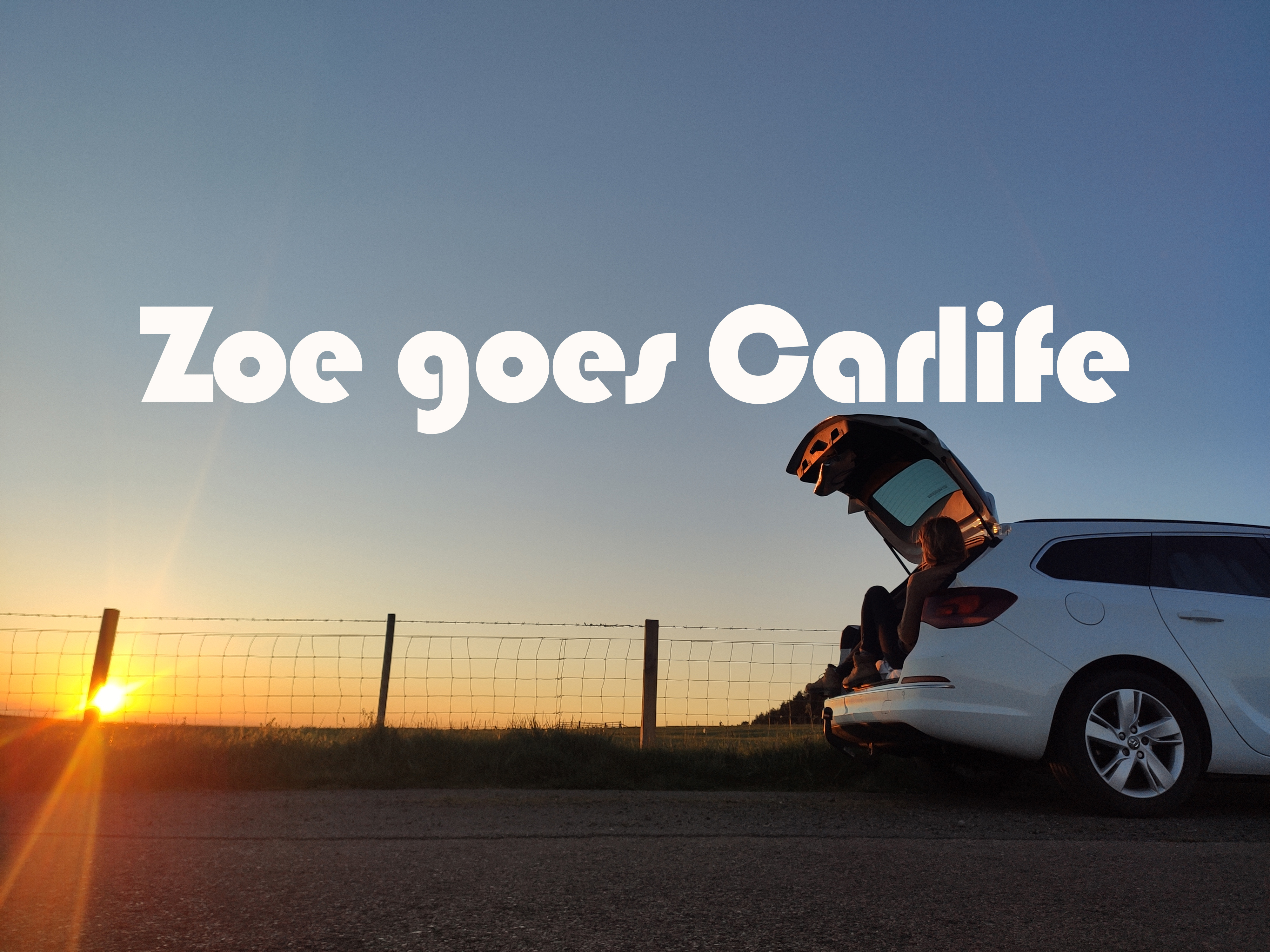 Because vanlife is too mainstream

It has been a minute. I’ve not gone many places, other than some of the darker zones in my mind. But we’re back now and exciting things are happening, and who best to tell but you guys. Aren’t you lucky?

So now, when people ask where I live, I tell them ‘Astra Estate’ – it’s amongst the ranks of the X-Mansion, the Umbrella Academy and Hogwarts School of Witchcraft and Wizardry – in the small town of Vauxhall. It has a white exterior and large windows, no double glazing but excellent natural lighting, complete with an office and a walk-in wardrobe…. Also four wheels and an engine.

YES I have moved into my car like any normal, itchy-footed, travel-starved gal would do when overseas exploration is off-limits and she also wants to hold down full-time study and two jobs in her beloved North East England.

Why? Oh, for so many reasons, but namely – why not, and why not now? I have always fancied van-life but, well, I don’t have a van and can’t afford one right now. Life changes and it seemed like the opportune moment to get on the road. Plus, one of my jobs involves a lot of late-night travel in the car anyway and I don’t want to be chugging down the motorway at 60mph guzzling more diesel than my mileage contributions can cover.

I’d like to say it’s stealthy… but it may well be even more obvious than a van when all of the reflective window covers go up. I found cooking difficult enough in a fully equipped kitchen, but I reckon I’m better with a penknife and plastic chopping board anyway. My hygiene levels have actually probably increased because I make a conscious effort to battle the usual stigma. My wallet thanks me because I’m not allowed to buy more clothes or toys as I simply have nowhere to store them.

Toilet? Nature’s bathroom. Or time it with a supermarket run.

Views? Spectacular. Also, incredibly ordinary. And I love both.

Talk about making mountains out of mole-hills, I found a new way to store away my blinds and my day was MADE. I discovered a little cubby-hole that is now dedicated to hot drinks, and don’t even get me started on the car-kettle.  I’m getting the highs of summitting mini Everests on the daily.

Honestly, my biggest problem is that the ‘carlife’ hashtag on Instagram is taken over by Ferraris and Aston Martins that wouldn’t fit a picnic basket, let alone the whole life of a dirtbag climber that works the mornings in muddy fields and the afternoons in a research lab.

It’s been about one month already and I have no intention of stopping any time soon.

I’m also making it a little harder for myself by trying to be as plastic-friendly as possible – no single-use wipes or cotton pads, soap bars instead of bottles, refillable water containers, loose-leaf tea etc. In fact, there are several aspects of car-life that are arguably more environmentally-friendly such as water usage, electricity and food wastage, but that’s another blog.

I will strongly emphasize that this is entirely my choice. I am no more financially strapped than your average student and I have a wonderful network of family and friends that offer unlimited home-comforts which I gladly accept if I’m feeling particularly starved of convenience.

Looking forward to sharing some more of this adventure and always on the look-out for new park-ups. Anything in particular you want to know or read about? Any neat tricks or personal anecdotes to share? Need someone to cat-sit for a weekend? Tell me!

Finally, keep an eye out for when I’m headed your way – I’ll make you a Trangia tea and let’s catch up.