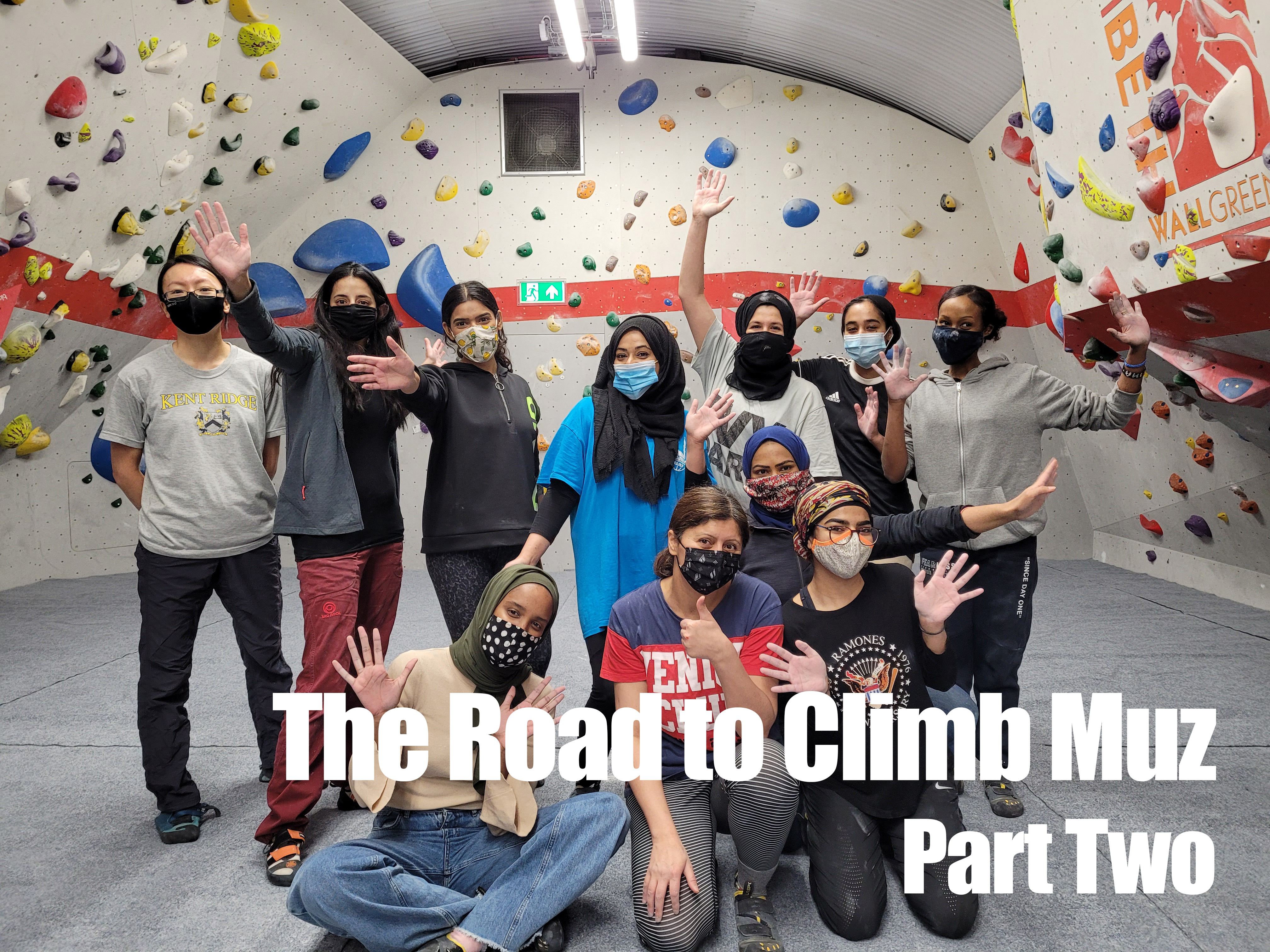 words by Siddrah , founder and attendees of Climb Muz events.

“I work in London, but I live just outside of London, in an area which is not very diverse. I’ve wanted to get into bouldering for a long time, but found it intimidating to go by myself. My experiences were limited to a few sessions as I had done with a friend years ago. During those sessions, the climbing centre had mainly been dominated by experienced male climbers. I was very nervous going to ClimbMuz by myself but I felt immediately at ease after meeting Siddrah and the group of like-minded women. It was a safe space to be myself completely. I received encouragement from the group and Siddrah, and simply enjoyed bouldering – something I’ve wanted to do for so long but never found the right opportunity until discovering ClimbMuz.”

When I started ClimbMuz, one of the things that weighed heavily on me was how do I make this group accessible. How can I reduce financial barriers to women attending these events as climbing is a very expensive sport. Initially, group members were paying full price for entry, then Bethwall which is part of the London Climbing Centre (LCC) offered us concession entries to the events which was absolutely amazing. To my surprise the group was growing at a steady pace.  Four months later, United We Climb (UWC,) stepped in to support. They provided financial support with shoes included. They had some funds available for people who could not afford to try climbing. I felt immensely proud at what the group has been able to achieve in a short space of time.

The events were proving very popular. Climbmuz’s profile was rising to the point where I had received a message from ‘The Nest’ climbing wall in Hayes. They were looking to increase diversity. There is  a huge Muslim community in their area so they offered the group free entry in the hope that other Muslims in the area would be inspired to embrace climbing as a hobby.  Other climbing walls, such as City Bouldering Algate in London also welcomed us as they were also interested in increasing diversity within their community.

The other thing that weighed heavily on me, was how do I reach Muslim women who feel as though they do not fit in within the mainstream Muslim community.  I knew from conversations there were Muslim women out there who felt as though they were not accepted and judged by the other members of the community. Through these conversations with some of these women who identified as Muslim but for example were also part of the LGBTQIAI+ community, who dressed differently, were not as practising, tattoos, piercing and so forth felt at ease knowing that they would be accepted if they came to a ClimbMuz event and that they would have my full support.

“I’d never climbed with Muslim women before so I was incredibly excited when I stumbled across ClimbMuz. Siddrah has created an important space that encourages Muslim women to become part of the wonderful world of climbing – a sport which may previously have felt inaccessible to them. As a queer Muslim woman, I was apprehensive about attending my first ClimbMuz event for fear of not being welcomed due to my sexual orientation. After a single conversation with Siddrah, my apprehension disappeared and I made plans to travel down to London for an event. When my partner and I met Siddrah at a ClimbMuz event, it was clear that we were in a safe environment free from judgement. I was relieved to find that ClimbMuz embodied some of the key principles of Islam of love and acceptance.”

One of the questions that I have been asked is why these women cannot just go ahead and try climbing without this space. For some women, this space has given them the ability to try a hobby that they would have never considered. By creating this space, they have also had the confidence to go out and set foot into the climbing wall all by themselves.

“I am not joking, I really appreciate you. I know we barely spoke in the session but without your initiative I really would never have considered this hobby. It has helped my mental health so much. Thank you for creating ClimbMuz! I hope you know how much of an asset you are for us muslim women!”

To find out more about Siddrah and ClimbMuz – visit her on instragram, @Climbmuz and keep an eye out for upcoming events.