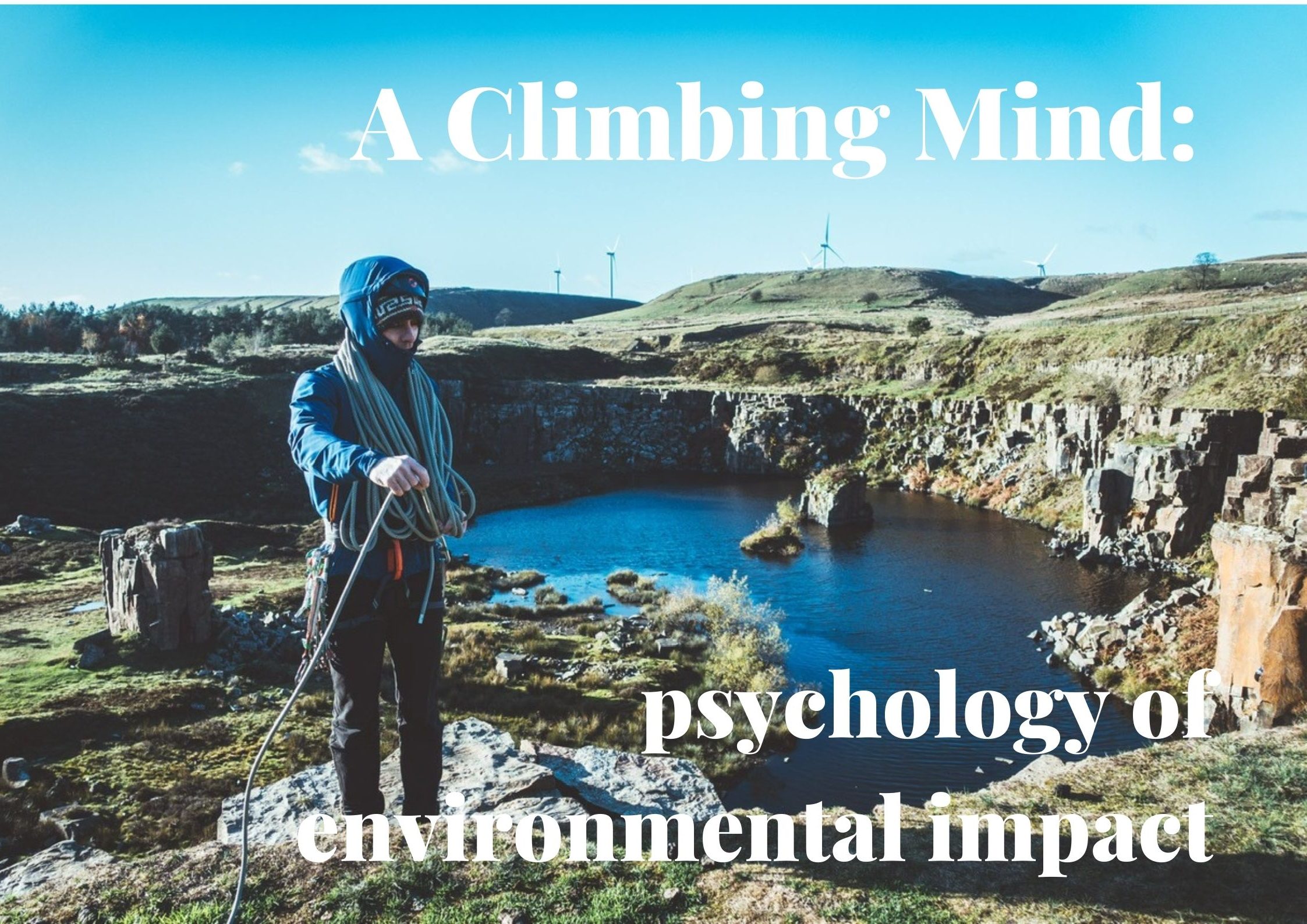 If you are reading a blog post from Dirtbags Climbing, I imagine you probably have an interest in the environment, big or small. I also imagine that like me, you may be confused, angry and frightened by the little to no interest that the majority seem to have, especially given this years IPCC report.  Rather than sit and stew in these feelings, I thought I would do some research and reflecting to try and find out why? Why are people not panicking or changing their ways, when the science is reporting that things are going to get very bad!

My aim is that by understanding people’s positions, I can have conversations that can facilitate change in a positive and respectful manner for all.

Defence Mechanisms are tools that our subconscious mind uses to protect itself, it will employ these tools when reality is too much for it bear. Two that may be employed for climate change are denial and rationalisation. Denial is self-explanatory, we simply deny the reality of a situation. You would hear a person with climate change denial say, ‘the climate has always changed, it’s natural, we once had an ice age’. Someone who is rationalising might say something like, ‘hotter summers, that sounds great’ or ‘it won’t affect me in my lifetime’. The person rationalising isn’t denying the situation; however, they are making it more comfortable for themselves.

The best way to engage with people who are employing these defence mechanisms, would be to ask them questions and reflect what they say back to themselves. As an example, you could say, ‘are you sure it won’t affect you?’ or ‘what about the younger generation?’. To the denier, you could ask, ‘are you sure that human activities aren’t playing a part?’ This will make them question their beliefs without getting defensive, when we state things at people it can come across as aggressive, which leads people to go into a defensive mindset.

Most western countries have a religion which has surpassed all others in terms of a strict following, capitalism. I realise that capitalism isn’t a religion, however it has become a belief in something larger than oneself and I merely use it as a comparison having read Sapiens, in which Harari states :

He goes on to describe how ‘this new religion’ is even ingrained into science and politics, as scientific research is typically funded by private investors or governments, typically with the aim of improving ‘economic growth’ in some way.

As our governments are so invested in economic growth, we have been too, people are generally indoctrinated into a belief that they are ‘British’ or whatever nationality you are. This then goes on to develop into smaller tribes within the large tribe of nationality, what town you are from, what sport, music etc you like. These are all microcosms of identity. Many of you reading this are likely to identify as a climber, wild swimmer, runner; the list goes on. All these smaller tribes have their own set of values and ethics within the larger tribe. It even goes into smaller tribes from there, are you a boulderer, trad climber, sport climber etc.

The point I’m hopefully making here, is that we all have our own unique set of beliefs dependent on how we identify with ourselves and those around us.

Most of our belief systems develop from an early age, from when we are a baby to around seven years old. Any beliefs which were developed at this age are very ingrained into the subconscious mind and are difficult to change. I’d argue that the capitalist doctrine is ingrained into us at these ages, with adverts for the various toys available shown between cartoons, our parents taking us around shops, we are consumers from an early age. We learn that we can acquire goods with relative ease, no one discussed where they come from or what impact they have.  If I look at myself that was me for a long time, my awareness of the environment didn’t start developing until my early thirties (I’m 37 now). I feel I was open to changing my belief system and to reject capitalism for several reasons, I was going through a period of change with my mental health, I was studying psychology to become a counsellor, I got into climbing and got interested in its history of anti-establishment.

So how do we change things?

Ultimately, we can’t make people change and it would be ethically wrong to try do so in my opinion, we can only hope that by using some of the language I have suggested, we can have positive conversations which allow people to decide what is best for themselves as well as the planet and their fellow humans.

We could also change the system, for those who want to remain with the consumerist mindset, we can do so by us switching to a more circular system, rather than using fresh materials, we repurpose. Dirtbags are one of those companies leading the charge in this field, it seems larger companies are starting to follow suit, particularly in the outdoor industry.

If you want to see a change, be the change

I feel one way we can have a positive impact is by making changes ourselves, I have made small steps in being more environmentally friendly over time, I know there is more I can do and shall continue to do so. Through making changes I have seen that this inspires people around me to also make changes. Our subconscious is a bit like a sponge it soaks up all the information we consume, it stores it away to learn from it. Conflicts will arise as that old capitalist and consumerist mindset is still stored, however the newer information our mind receives the greater the influence it will have and the stronger it will become in fighting the old belief system. So don’t be too hard on yourself if you occasionally take a step back.

I set myself a task for 2021, to not purchase any clothing or shoes, to repair or resole. Honestly, I didn’t achieve this, I bought three items of clothing and one pair of shoes. Which could be viewed as a failure, however my decisions for the items were more conscious and not from a simple consumer angle. The items either replaced worn out items or fit a specific purpose within my life that other items didn’t achieve. While this goal is a personal one, in setting personal goals where you make a change, you can talk about these publicly creating a conversation with others. Your changes can have ripple effects within your tribe.

I realise that the climate crisis we are facing can seem daunting and overwhelming, I certainly feel that way sometimes, especially when I don’t see the change happening as quickly and as urgently as I personally feel it needs. However, change happens over time and the more we engage the bigger this change will be, things might start small but over time will have a larger impact. I also feel by staying in a positive mindset with our goals towards making changes, is something people are more likely to want to embrace and become a part of.