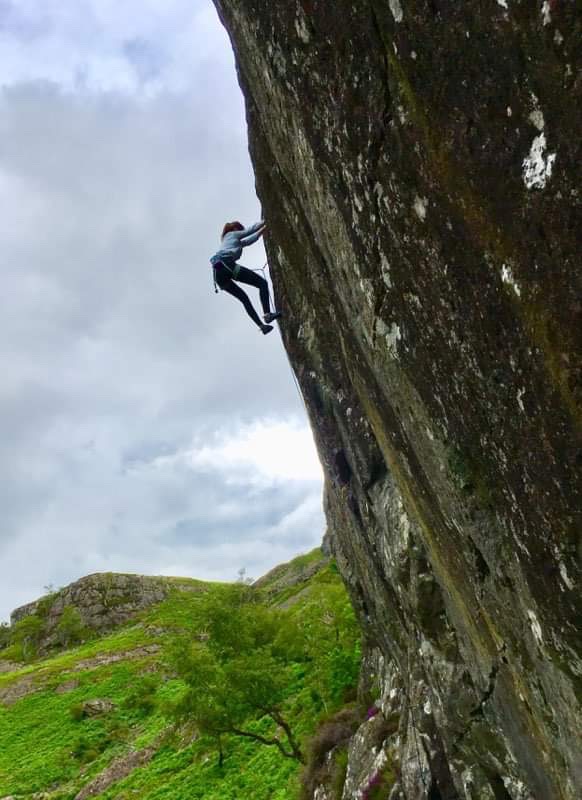 As the mornings get colder and the leaves begin to golden, we asked Dirtbags climber Anna Taylor to reflect on her summer of climbing both in the Lakes and Yorkshire. The second part of this blog will follow, covering her time in France, and looking onward to Autumn on Gritstone.

In the first part of this blog, I’ve written down my account of some of my favourite routes this year. The hard routes, and particularly the new route, pushed my boundaries mentally in one way or another.

It was July, and I thought that it was about time I tried an E8 again. I wasn’t sure what to go for, it was too hot for grit, but I didn’t want to commit to a project on a mountain crag and get rained off either. After a bit of research, I decided that Disorderly Conduct at Reecastle crag might be a good option, it was five minutes from the car, and was apparently steep and crimpy, so would potentially suit me. So Ben and I headed up to have a look.

Our first session was on a scorching hot day, and although I quickly did all the moves, I really didn’t feel like going for the lead. The gear also wasn’t as good as I’d hoped for, there were quite a few pieces lower down, but none that I trusted 100%. The good bits were all too low to be of much use.

The climbing itself was interesting, it started with a really burly lower section on good holds, that became very strenuous if your feet were in the wrong place. Then there was a crux throw to a tiny pocket, followed by a run out on small, sharp crimps.

I was finding the crux particularly annoying as I couldn’t quite reach the pocket from both of the good footholds and had to bump my right foot up onto a smear before committing to the move, making it feel slightly more sketchy. The sharp holds on my skin meant we quickly called it a day. I was keen to return.

Two days later I was back at Reecastle, standing under the route and taking a couple of deep breaths before going for the lead. We’d had a slightly shambolic morning to say the least, featuring a flat tyre and a lot of driving to and from Keswick to sort it out. Warmed up and ready to go, I was a bit nervous mostly because all my hard headpoints in the past had been slabs or vertical walls, so I’d never had to worry about getting pumped or my fingers uncurling before. But I knew I could do it as long as I stayed calm. Setting off, as always, was the hardest part, and once I was on the wall I found it easy to get into a rhythm and flow through the moves.

Once I’d passed the initial overhang and stuck the pocket move I went into auto-pilot, and before I knew it I was at the rest jug and it was all over! I placed a couple of cams then wandered up the super easy upper section to the top of the crag.

Yes! I was really happy to have done the route, as I felt like it was a step out of my comfort zone in terms of style, but the thing I was most happy about was that it actually hadn’t felt that hard. I had to try, and try hard, but I knew that I wasn’t physically or mentally at my limit, and that more than anything was a victory to me.

A new one! I’d found a new line in Langdale.

Whilst I could top rope it fine, there was a bit of an issue with the gear…mostly the fact that there wasn’t any. One humid evening I found myself stood under the route, without a harness, just one bouldering pad and Neil Gresham for company. Realistically it was way too hot to contemplate a forty foot solo, but sometimes things just happen…

It was one of those angel/devil moments.

After a twenty minute spell of dithering, I found myself stepping off the ground. I’d told myself that I should just climb up to the first rest, then from there I’d decide what to do. Of course I knew that once I was up there it was irreversible and I would have to commit. Soon I was smearing gingerly across the first traverse, trying not to put too much weight on that suspect handhold. I’ll admit that I was pretty scared of the next bit, the fact that the rock-over had felt so hard last time (on a rope) was haunting my thoughts, but too late for that, I was there.

I’d stepped my foot high, and I was suddenly in the middle of the move. Just balance, balance, push with your leg, stand up, reach, got it!

I was incredibly relieved to have made it to the good holds. While the next traverse was balancy and would surely feel outrageous without a rope, I’d never fallen off it, and I was not about to now. The forty foot plunge into a pile of boulders would not be an ideal end to the night. In reality it was just going through the motions, the hard part was long behind me and soon I was pulling over the slopey top out to victory.

In the end, I named the route Priceless. Grade wise I gave it E7 6b, which is nothing but an estimate, but it felt about that to me. It was nice to finally get another new route done, but next time I might wait until it’s a bit cooler!

The July heatwave was proving a bit much for Ben and I, so we decided to leave the Lakes and head over to North Yorkshire for a couple of days. There was a lot more time spent on the beach and playing cards than actually climbing anything.

Firedance at Stoupe Brow is a big, imposing looking arete perched half way up a steep hill, with beautiful views of the coast. For some odd reason, there is a line of bolts on the right hand side of the route that, while a bit silly, did save us the task of bush-whacking to the top of the crag. Ben led the route on the bolts, and climbed it easily apart from one move where he looked like he was on the absolute limit of his reach.

Sure enough, when it was my turn, I couldn’t quite make the span to the hold. This was so frustrating, particularly as the rest of the route felt fairly easy, and I knew that if it wasn’t for this move then I’d solo it without a second thought. Eventually, after quite a lot of swearing at the rock for not forming holds that were closer together, I discovered that if I used a slightly higher foothold, I could just about creep my fingers onto the hold. The problem now was that I was so stretched out that my feet were doing nothing, and the only solution was basically to do a pull-up to get my feet back on. Not ideal, but there was no alternative.

After a while I was top-roping the route cleanly every time. Slowly, the thought of going for the solo was re-entering my head. I decided to come down for some thinking time. For a while I wandered about, with the usual dilemma in my head. Do I or don’t I? I’ve been in this situation so many times now that you’d think I’d be quicker at deciding, but it always takes a while. In the end, as per usual, I decided to give it a shot. I knew Ben thought I was being reckless, and maybe I was a little bit, but I knew that I could do it.

A few moves in and I was at the point of commitment. Not wanting any long pauses to put me off, I went for it. All I remember from the crux is thinking “shit…I’m really having to try here!” but I managed to just about creep my fingers onto the hold, before my feet came off and I hauled my body weight up and back onto the wall. Although Ben looked like he was about to have a heart attack, I could tell he was happy that I’d gone for it. We packed up and left the crag, and as soon as we got back to the Lakes we jumped into Rydal water to finally cool down (the joys of owning a van with no air-con).

In a way I’m still surprised that I went for Firedance. A year ago I would have wanted perfect conditions for such a sketchy move, and some decent bouldering pads, but I was happy in the knowledge that the heat and lack of any sort of protection didn’t matter as I knew I wouldn’t fall.

Some people may think that that’s crazy, but these routes all come down to confidence, and if you have enough of it, then I think you’re pretty safe. I’ll definitely be planning a return trip to North Yorkshire later in the year.